Getting started in the bison business: A long and winding road

After several school- and job-related moves, we found a place we wanted to put down roots and found a spot of dirt to put them in: In 2003, we bought farm ground five miles south of Paola, Kan. There followed several years of house-building and -finishing (we're still working on that part) before we could move to the farm in 2008.

We have a fantastic view!

We live in the middle of 134 acres: some pasture, some hay field. The views are great, but it's kind of a lot to mow. So now what?

Renting out the land worked OK, but it seemed a waste not to get more use out of it. We enjoyed vacationing in the Black Hills in South Dakota. Maybe that's what got Kevin thinking about raising bison. Whatever it was that gave him the idea, he started researching. We joined the Kansas Buffalo Association and National Bison Association, attended conferences and auctions, talked to other members and learned a lot about bison. Of course, the more you learn, the more you realize there's a lot more to learn.

Regardless, we decided we wanted to raise bison. Unfortunately, although the farm we'd bought was fenced, the fence was old, brittle and rusty barb wire. We removed what seemed like 100 miles of barbed wire: cutting it off the t-posts in sections, rolling it into manageable hoops and sending it to scrap metal recycling. The t-posts were old, too, and today's clips don't fit them, so we also pulled out t-posts. Some were easy--they fell over because they were rusted at the ground level; the wire was all that had kept them upright. Most, however, had to be pulled out with the tractor and log chain. Even the tractor didn't work on some that tree roots had grown around.

Several pairs of leather gloves and a couple of tetanus shots later, we finally had the old fence out and were ready to put the new fence in.

I should mention that neither of us come from farming backgrounds, although Kevin helped his grandpa on his farm south of Cherokee, Iowa. Thankfully, the Internet has information on just about anything you need to know. Kevin researched bison and fencing and concluded that high-tensile steel was our best bet, mostly because no fence will stop a bison determined to get out, so high-tensile wire was as good as any other fencing. Well, maybe a rock wall would keep bison in, but a 6-foot-high rock wall around 134 acres just isn't practical.

After more research, we bought the materials, and fence-building commenced. A manual post-hole digger is cheap, but not optimal for the number of wood posts we needed to place, so we rented an augur. It worked really well until we got to the third post hole where we encountered rock. We tried a few other spots but were forced to conclude that the augur wasn't going to work; we had sentenced ourselves to 40 or 50 years on the hard rock pile.

Kevin went back to his research. The result was a tractor-mounted, hydraulic post driver that we bought through Kencove. It was a big improvement over the augur, but some rocks still defeated it. Still, we managed to get all the posts in, the wire strung and electrified (more research on electric fence chargers).

Meanwhile, on a motorcycle trip in 2012 in the nearby countryside, we saw a bison handling system in a pasture that looked as if it hadn't been used in years. A faded ranch sign had a phone number. We called it and ended up buying the handling system. It was just the other side of Paola, so we were able to haul the whole thing back on a flatbed trailer, then position it with the tractor and lots of help from visiting family and friends, most of whom have not visited since.

A flatbed trailer pulled by a 1997 Chevy 2500 4x4 is good for hauling lots of things, but not bison. More research and online searching found a used, heavy-duty Chevy pickup for sale in Texas and a 24-foot stock trailer  from 4-Star Trailers in nearby Missouri. We had the pickup delivered, then picked up the stock trailer. A couple of weeks later, we were on our way to South Dakota with the hope of buying bison heifers at the annual Custer State Park auction.

We officially started in the bison business Nov. 16, 2014, when we brought our 12 bison heifers--seven yearlings and five calves--home to the ranch. 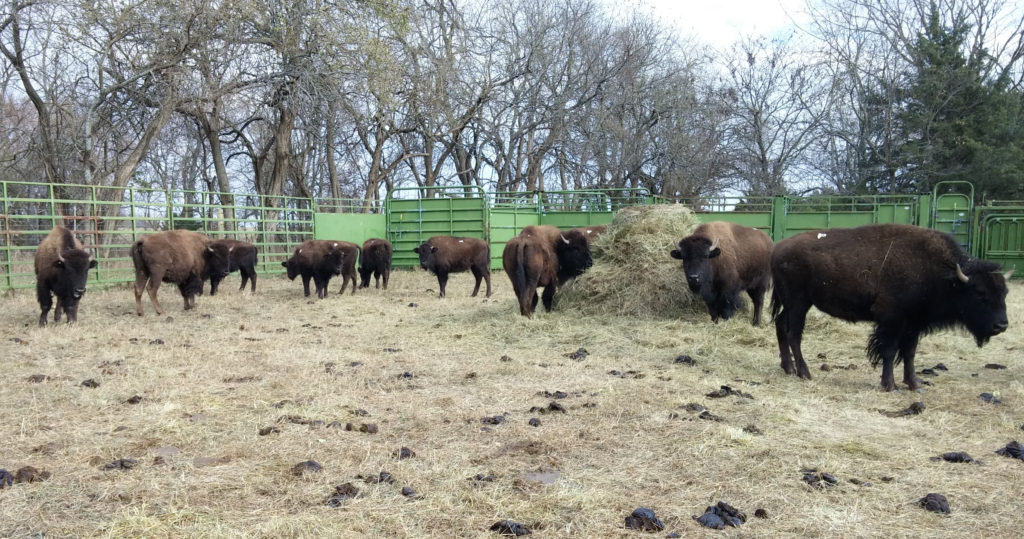