Make Hay While the Sun Shines

It’s hard to believe that hay season is here already. Mowing and baling hay is an iffy business as are most farming operations that depend on weather. The farmer/rancher must make sure there’s enough time to mow, let the hay sit and dry for a bit, then rake and bale it before it rains. Some years are more difficult than others because the rain just seems to come at the wrong times.

Being new to ranching and still building our enterprise, we don’t have the equipment to mow and bale our hay ourselves, so we depend on a neighbor. That’s probably a good thing in our case because he has lots of experience in ranching and baling hay, so he’s excellent at judging when he can get the job done.

If you’ve never seen hay baled before, it’s quite the spectacle. The mower sits high off the ground and runs off to the side of the tractor, connected to the tractor power take-off (PTO) by a really long arm. The PTO spins the mower blades, cutting the grass close to the ground and letting it fall in a green stream behind the mower.

A hay rake can be strictly mechanical or run off the PTO. It’s made up of a series of circular tines that rotate and pull the hay from the edges to the center of a row, piling the hay in a neat stack.

The baler then runs over the stacked river of hay, scooping it into the body of the baler where it is tightly rolled into (in our case) large, round bales, then bound with net wrap or plastic twine. When the baler is done wrapping the bale, the whole back end of the baler opens up, and the bale rolls out on the ground. I get the biggest kick out of watching the baler expel that big bale.

My favorite part of haying, though, is seeing the finished bales dot the hay field. It just feels like home. 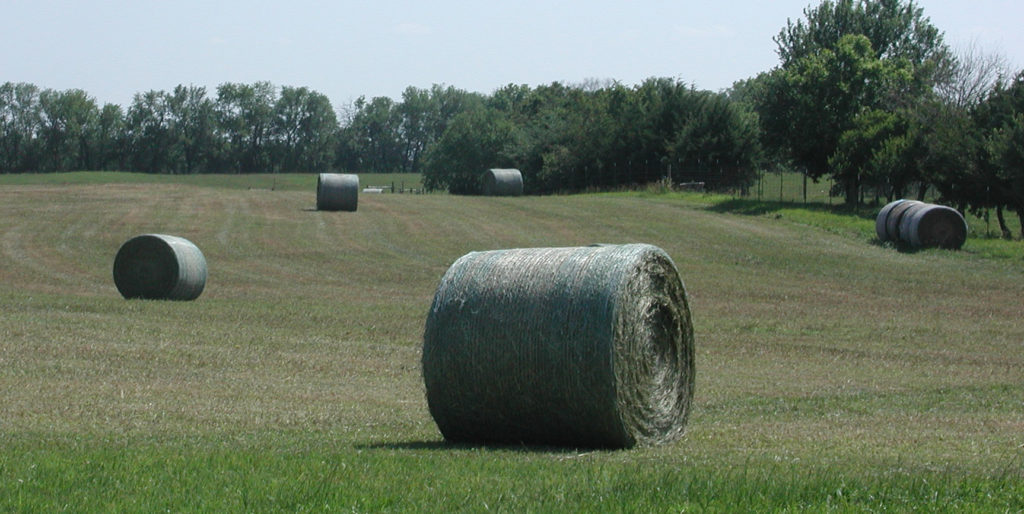